Flag Folding and TAPS
Did you know that at every military funeral, the 21-gun salute (or 3 rounds of fire) stands for the sum of the numbers in the year 1776? After the folding of the service members flag, TAPS is played. Bugles Across America is an organization that will perform live TAPS to honor Veterans. To request a bugler, contact http://www.buglesacrossamerica.org
Have you ever noticed that the honor guard pays meticulous attention to correctly folding the American flag 13 times? All of us have observed the honor given to our flag during parades and military funerals. The 4th of July can be a time to reflect on our independence and the service men and women who fought for it. God Bless all of you who served and are serving now. Here is what we believe the 13 folds represent. Enjoy and share with a friend.
Thirteen Folds of Our Flag
The 1st fold of our flag is a symbol of life.
The 2nd fold is a symbol of our belief in eternal life.
The 3rd fold is made in honor and remembrance of the veterans departing our ranks who gave a portion of their lives for the defense of our country to attain peace throughout the world.
The 4th fold represents our weaker nature, for as American citizens trusting in God, it is to Him we turn in times of peace as well as in time of war for His divine guidance.
The 5th fold is a tribute to our country, for in the words of Stephen Decatur, "Our Country, in dealing with other countries, may she always be right; but it is still our country, right or wrong.
The 6th fold is for where our hearts lie. It is with our heart that we pledge allegiance to the flag of the United States of America, and the Republic for which it stands, one Nation under God, indivisible, with Liberty and Justice for all.
The 7th fold is a tribute to our Armed Forces, for it is through the Armed Forces that we protect our country and our flag against all her enemies, whether they are found within or without the boundaries of our republic.
The 8th fold is a tribute to the one who entered into the valley of the shadow of death, that we might see the light of day.
The 9th fold is a tribute to womanhood, and Mothers. For it has been through their faith, their love, loyalty and devotion that the character of the men and women who have made this country great have been molded.
The 10th fold is a tribute to the father, for him, too, has given his sons and daughters for the defense of our country since they were first born.
The 11th fold represents the lower portion of the seal of King David and King Solomon and glorifies in the Hebrews' eyes, the God of Abraham, Isaac and Jacob.
The 12th fold represents an emblem of eternity and glorifies, in the Christians' eyes, God the Father, the Son and Holy Spirit.
The 13th fold, or when the flag is completely folded, the stars are uppermost reminding us of our nation's motto, "In God We Trust."
After the flag is completely folded and tucked in, it takes on the appearance of a cocked hat, ever reminding us of the soldiers who served under General George Washington, and the Sailors and Marines who served under Captain John Paul Jones, who were followed by their comrades and shipmates in the Armed Forces of the United States, preserving for us the rights, privileges and freedoms we enjoy today. There are some traditions and ways of doing things that have deep meaning. In the future, you'll see flags folded and now you will know why Flag Folding and the meaning of each fold. 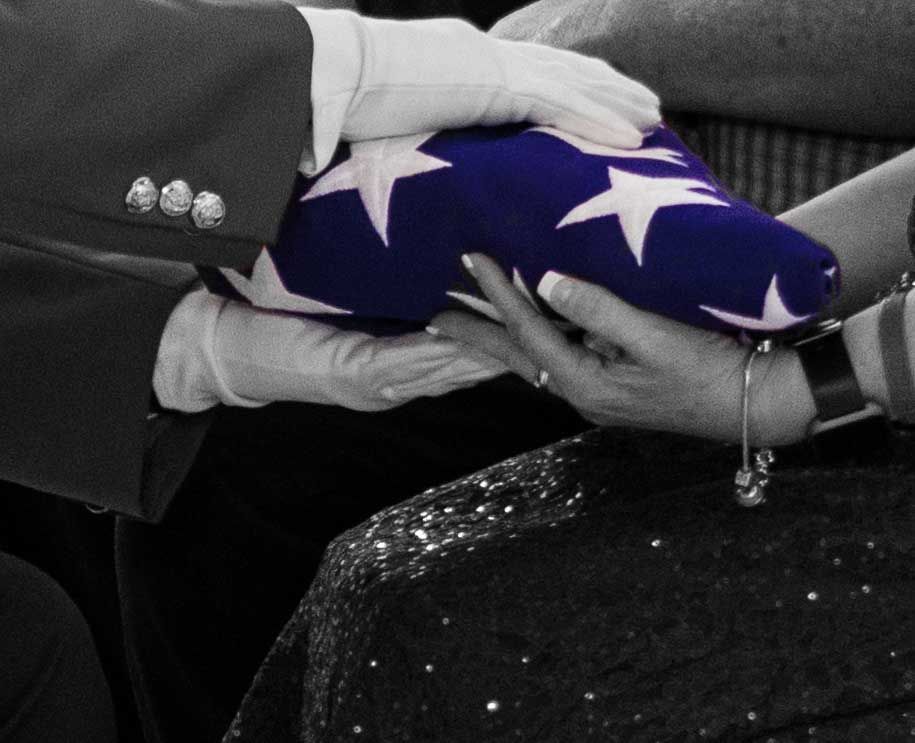 Questions, concerns, or just to make contact with a Marine in Oklahoma email Here:
Semper Fidelis!