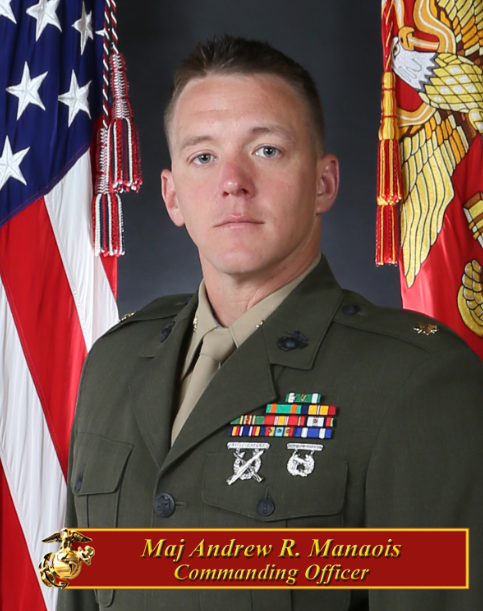 Major Andrew R. Manaois grew up in Loganville, GA and graduated from Reinhardt College in Waleska, Georgia with a Bachelor of Science in Sociology in May 2007.  In October 2008, he attended Officer Candidate School OCC-199 and commissioned in December 2008.  Following his commission, he attended The Basic School and Infantry Officer Course.

In October 2009, Major Manaois reported to 1st Battalion, 7th Marines where he deployed in support of the 31st Marine Expeditionary Unit as a rifle platoon commander in Baker Company.  From February to October 2012, Major Manaois deployed to Sangin, Afghanistan in support of Operation ENDURING FREEDOM as the 81mm Mortar Platoon Commander.  Following these deployments, he served as the Battalion Assistant Operations Officer.

In May 2013, Major Manaois reported to The Basic School where he served as a Military Operations in Urban Terrain (MOUT) primary instructor until February 2014.  In March 2014 he attended Weapons and Tactics Instructor (WTI) Course.  Following graduation from WTI, Major Manaois served as an instructor, class advisor, and deputy director of the Infantry Officer Course from April 2014 to August 2016.

From August 2016 to May 2017 Major Manaois attended the Expeditionary Warfare School and graduated as the honor graduate and Shipman Award Winner.

In June 2017, Major Manaois checked into 1st Battalion, 6th Marines.  He assumed command of Weapons Company and deployed to Mihail Kogalniceanu, Romania in support of the Black Sea Rotational Force from February 2018 to July 2018.  In November 2018, he completed Operations and Tactics Instructor Course and assumed the role as the Operations Officer.  As the Operations Officer, Major Manaois deployed to Okinawa, Japan in support of the Unit Deployment Program 20.1 in February 2020.

Major Manaois reported to Recruiting Station Oklahoma City in June 2020 where he assumed the duties as the Commanding Officer.

Congratulations sir, we wish you the best of luck in your future assignments. We are very proud and excited to have you represent the Marine Corps right here in Oklahoma City!

Questions, concerns, or just to make contact with a Marine in Oklahoma email Here:
Semper Fidelis!